Last weekend, London was host to a multitude of events: concerts, royal visits, more than 1000 boats on the Thames, but most of all the very first Fat Quarterly retreat.


I bought a weekend ticket, so I had time to follow 4 workshops. I signed in for workshops that would allow me to learn new techniques, so I started from scratch in every class. As it was obvious that the Fat Quarterly organizers went to great lengths to make everything possible and put a lot of time and effort in this weekend (I can’t even start to imagine how much time went into organizing this event), I think it’s only fair to them to put at least some time and effort into this post and give an honest account. So prepare for lots of text.

Registration went smoothly, and to my surprise and delight, everyone received a goodie bag. There was fabric (Moda, Robert Kaufman and Oakshott), and plenty of fun stuff that always comes in handy. And Aurifil, which I have never used, so I will get a chance to see how different it is from my usual Gütermann. 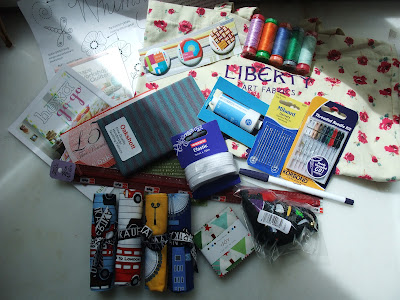 The contents of the goodie bag

We also received a "lottery ticket", and to my surprise I actually won something later that day: a "Sassy" by Sandy Gervais layer cake! 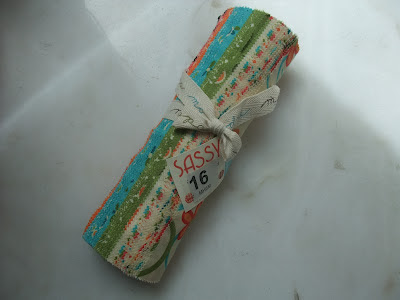 Kerry makes the most beautiful blocks using this technique, so it’s not an exaggeration to call her an expert. We could choose between several examples, some with Y-seams and one without. I chose the simplest block (without the Y-seams) because I had never done freezer paper piecing before. Everything was explained clearly by Kerry, who brought several examples of finished pincushions and mini-quilts. 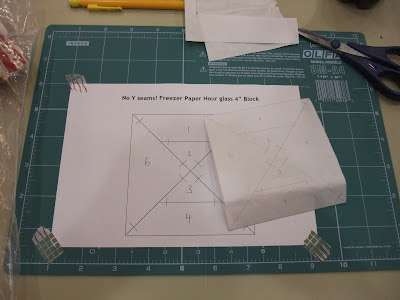 Kerry is a teacher in real life, and it showed: this clearly was a professional at work. She was prepared for everything (or at least looked as if she was), brought enough material so that even the forgetful students could participate (I plead guilty here: I had no freezer paper, kind of annoying in a freezer paper class), explained everything clearly and had several blocks in a half-finished stage so that we could see where to go from then. On top of that, she had a kind word for everyone and managed to encourage us all individually.

My only regret is that I did not choose a block with Y-seams, as I think it would have challenged me more. But the most important thing is that I learned the technique. I’m really happy to have followed this workshop and am sure I’ll use the technique again in the future. I actually have already been searching the internet to buy some freezer paper. 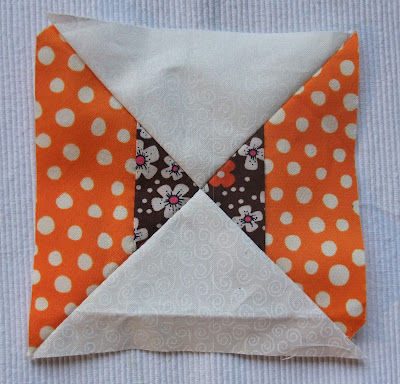 This was my finished block. It has yet to be transformed into a pincushion.

Another technique, and again an expert to teach us. Tacha makes stunning cushions, clocks and even whole quilts using this technique. She has a book out now, explaining how to do it, but I was lucky enough to be in her class.

We could choose between 3 projects: Hexed in,  Snowball and Square dance. I always have admired (not to say envied) the Square dance cushion that Tacha made, so I naively thought to give that a try and enthusiastically cut hundreds of tiny pieces of fabric in preparation of this class. I was a fool.

The first 15 minutes or so of the class were spent cutting paper pieces (it is called paper piecing after all), something I also should have done at home. After that there was a short explanation, and everyone started sewing.

It took me about another 15 minutes or so to go completely nuts. Fiddling and tinkering with those small pieces of paper and fabric drove me insane. I didn't have the patience to do it, and probably never will.  I might consider making a big quilt using this design and machine stitch it, that might be a possibility. But at least I gave it a try and know that it's not my cup of tea. And it was nice to sit all together at a big round table. Now that I know how much time goes into making her quilts, I admire Tacha even more! The amount of patience of that lady is beyond my imagination and reach. And I must not forget to add that Brioni was absolutely charming and wonderful. 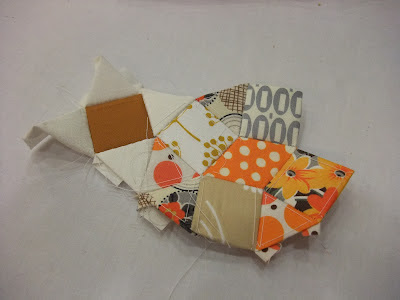 This is what I had managed after 2,5 hours in the workshop 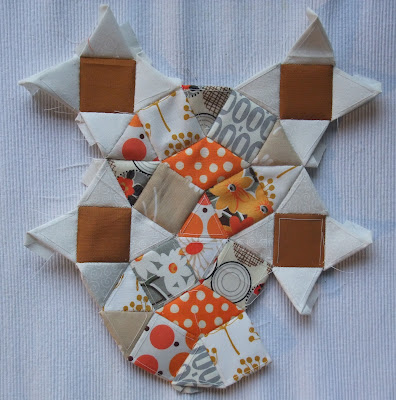 And this is what I had after exploring my masochistic side
and spending a couple more hours working on it.

I was a bit surprised to find this workshop on my list of classes, as I did not remember signing in for this class, but I thought, why not? Tips about making your own block design and how to mix and match fabrics are needed and welcome as far as I'm concerned.

Everyone sat at one of the big round tables again, paper and pencil ready, and John gave a very short introduction about how useful it can be to sit behind a piece of paper and think about an original block design. First we had to make a block with squares and rectangles, then with triangles and finally with stars. Everyone had to show his design after each round and explain the how and why of it. It was a unusually calm and silent class, firstly because the group was really small, and secondly because everyone was concentrated on their own design.Glancing at your neighbour's design felt a bit like cheating in school. And John and Katy were really sweet, but were also concentrated on their design, like everyone else around the table.

To be honest, I could have used a bit more tips about designing a quilt block. The idea is not without merit, but I wouldn't exactly call it a class, as I don't really have the impression I learned something. Maybe it should have been more concrete, or a theoretical part followed by a class? Analyzing different quilt blocks and quilts? A bit more interaction at the table? And some mixing and matching fabrics tips would have been welcomed too.

This was without a doubt the class I was most looking forward to. The portholes quilt from Lucie Summers is stunning and I was very curious to see how to make these blocks.

Lucie was a fun teacher, although it was sometimes difficult to hear her because of the noise from the other groups in the main hall. But she made sure to go to everyone and explained everything to me again so I could get started again in a slightly less chaotic way than my first try.

It turned out to be quite simple, actually, and I managed to finish one porthole without a problem. If I had brought my own sewing machine, no doubt I would have managed to make a second block. I'm really looking forward to make more blocks with the flower template we also received. And maybe make letters, that would be fun. Everyone was really exited about this class and I'm sure there will be plenty of portholes quilts showing up on Flickr over the next couple of weeks and months. 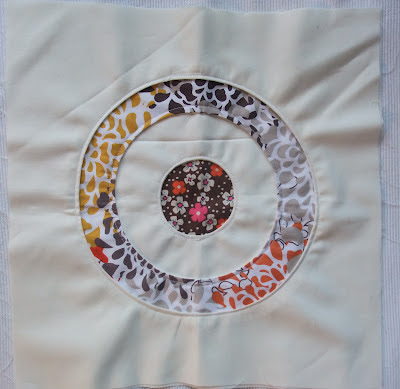 The result: a finished but very wrinkly porthole!

Anne
Addicted to sewing and fabric, always ready to start a new project, not so good at finishing them

This is a Flickr badge showing public photos and videos from Anne@surelynotanotherproject (mianni2010). Make your own badge here.